Out In The Silence Award for Youth Activism 2012

Three years ago, as stories about the alarming rates of anti-gay bullying and youth suicide were beginning to receive national attention, we started traveling to communities across the country with Out In The Silence, our PBS documentary about the brutal bullying of a gay teen and his family's courageous call for accountability, to raise awareness about the issues and help people develop solutions.

While the campaign revealed that tremendous challenges remain for lesbian, gay, bisexual and transgender (LGBT) people in towns large and small alike, it also introduced us to the vibrant new, youth-led movement that was emerging to push for justice and equality for all.

Inspired by these bold efforts, we launched a new national Award for Youth Activism to encourage, highlight and honor creative and courageous young people and their work to call attention to bullying, harassment, bigotry and discrimination and to promote safe schools and inclusive communities for all.

The program has exceeded all expectations, with nominations for inspiring individuals and organizations pouring in from across the country.

Today, National Coming Out Day 2012, we're excited and honored to announce the Winners of the Second Annual:


Out In The Silence Award for Youth Activism 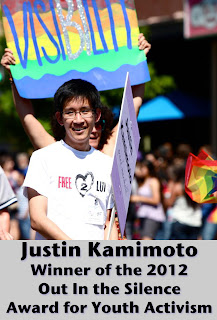 Justin Kamimoto - Fresno, CA
At 18 years old, Justin epitomizes what it means to be a community activist. When he came out at his high school two years ago, Justin founded the Clovis North Gay Straight Alliance, an effort to help create a safe environment for LGBT students and their allies and to bring an end to the homophobia and transphobia that made learning so difficult for so many, not a small feat in the very conservative San Joaquin Valley of Central California.

Shortly after, Justin joined the board of Reel Pride, Fresno's annual LGBT film festival, then became director of student outreach, building a new audience for and pumping energy and excitement into one of the country's most important and visible media events.

Now a sophomore, and Bulldog Pride Fund Scholar, at California State University at Fresno, Justin is not sitting on the laurels of his early accomplishments. In order to address the gaps in family acceptance, support and services for LGBT youth in the Central Valley, he founded MyLGBT+, a unique community resource that raises public awareness about the needs of LGBT youth and provides forums for discussion, advice, support and encouragement. Justin is organizing for change by helping to identify and meet immediate needs while providing a training ground for future activists! 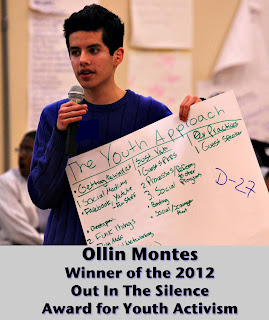 Ollin Montes - Longmont, CO
Last April, a right-wing talk radio jock in Colorado whipped up a firestorm of controversy about the first-ever Diversity Day at Longmont's Niwot High School, a full day of workshops aimed at encouraging students to be understanding and respectful of cultural and other differences. In the midst of all the negative attention, aimed primarily at workshops addressing LGBT issues, and efforts to shut it down, 17 year-old student Ollin Montes held his ground. As a member of the high school's Gay-Straight Alliance and the City of Longmont's Youth Council, Ollin had helped organize the event and inspired many in the community by his insistence that it go forward as planned. In fact, he understood an important organizing maxim, that in crisis comes opportunity. Diversity Day was a huge success and helped open long-needed dialogue, and build bridges, on many issues in the community!

As president of his own high school's GSA, Ollin went on to found and lead the St. Vrain Valley United Gay Straight Alliance Network, and is working with statewide advocacy organization One Colorado, to make his and other schools and communities in the region more inclusive and accepting of all. 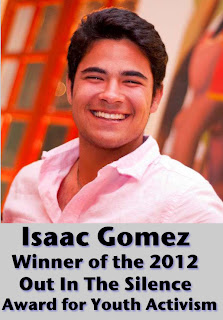 Isaac Gomez - San Diego, CA
Five years ago, when Isaac Gomez, at twelve years-old, came out as female-to-male transgender, he was asked to share his story with a college class of more than 100 medical and psychology students. While not yet fully confident of his own identity, but with the unyielding support of his amazing family, Isaac accepted the opportunity, was open to each and every one of the questions posed by his curious audience, and discovered his passion, and talent, for public speaking and community education.

Now a 17 year-old freshman at Standford University, Isaac has years' of experience raising public awareness about what it means to be transgender, or as he says, normal. His courage and willingness to be visible has put him in the hot-seat and he and his family have become a powerful symbol for love and acceptance for all, from participating in a successful effort to enact new rules to prevent bullying and harassment in the San Diego Unified School District to speaking at the International Conference of Families for Sexual Diversity in Chile, to appearing on CNN. When asked to talk about what it's like to be Latino and LGBT Isaac says: "My family and I don't think of ourselves as Latino or LGBT activists. We're activists for human rights." 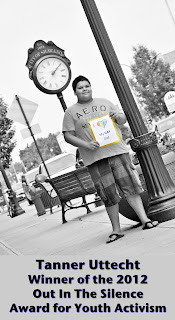 Tanner Uttecht - Shawano, WI
This past January, 14 year-old Tanner Uttecht arrived home with the Shawano High School Hawk Post in his hand and told his dad that they needed to talk. The paper had published an opinion piece in which the author condemned gay adoption and parenting, quoting scripture to say that "homosexuality is a sin punishable by death." Tanner said he thought to himself: "This can't be serious. I'm being raised by gay parents and there is nothing wrong with me." He was angry, but determined not to let the situation get the best of him.

Tanner and his dad took their concerns to the school superintendent who issued a public apology, but an anti-gay hate group known as Liberty Counsel helped whip the story into a national controversy. Instead of backing down or being silenced by bullies, Tanner saw it as an opportunity to educate his peers and adults in the community alike. He began wearing rainbow pins to school and a button that read: "I vow to help end bullying against LGBT people. My father is gay. I am a straight ally."

When Tanner met resistance from teachers, he formed a gay-straight alliance to help the school and residents of their small community understand that it is OK to be gay. A nearby PFLAG group called Tanner an angelic troublemaker, a title that seems to fit him quite well. 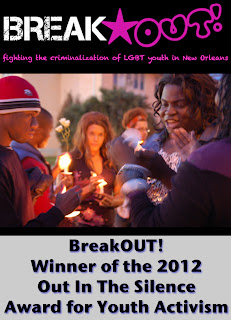 BreakOUT! Fighting the Criminalization of LGBT Youth - New Orleans, LA
Across the U.S., the brutal and dysfunctional juvenile justice system sends queer youth, especially queer youth of color, to prison in disproportionate numbers, fails to protect them from violence and discrimination, and to this day often condones attempts to 'turn them straight.' In post-Katrina New Orleans, the notoriously troubled police department compounded such problems by profiling and targeting LGBTQ youth of color for harassment and discrimination in jails and on the streets.

BreakOUT! was created by advocates at the Juvenile Justice Project of Louisiana who knew something had to be done. They formed BreakOUT! to help organize LGBTQ youth most affected by the criminal justice system, empower them to protect themselves and heal their communities, and to put an end to the criminalization of youth in New Orleans.

This year, BreakOUT! helped achieve an unprecedented victory through its "We Deserve Better" campaign. Its young members not only got seats on an Advisory Committee to recommend changes within the New Orleans Police Department, they courageously shared their stories with the U.S. Department of Justice during a federal investigation of the corrupt and scandal-ridden police force. As a result, a groundbreaking Consent Decree announced in July named discrimination toward the LGBT community as a top concern and established concrete measures to address profiling and discrimination against LGBT youth.

The road to full justice and accountability is still a long one ahead, but BreakOUT! will be there to let the world know that We Deserve Better!

Each honoree will receive $1,000 and year-long outreach and promotional support for their important work from the Out In The Silence Campaign.

In addition to these extraordinary award winners, several nominees deserve an Honorable Mention:

Thank you all and stay tuned for announcements about how to support and participate in the 2013 Out In The Silence Award for Youth Activism.

Special Thanks to Mark Porterfield (in Oil City, Pa. t-shirt) and his group of Guardian Angels from Laguna Beach, CA for their generous support for this year's Award for Youth Activism! 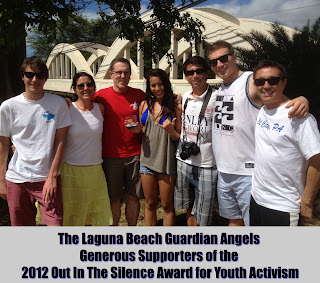 Out In The Silence trailer